NO, I'M NOT.
By selecting yes, you are confirming that you are legally over the age of 21 to enter this site.
Skip to Content Join 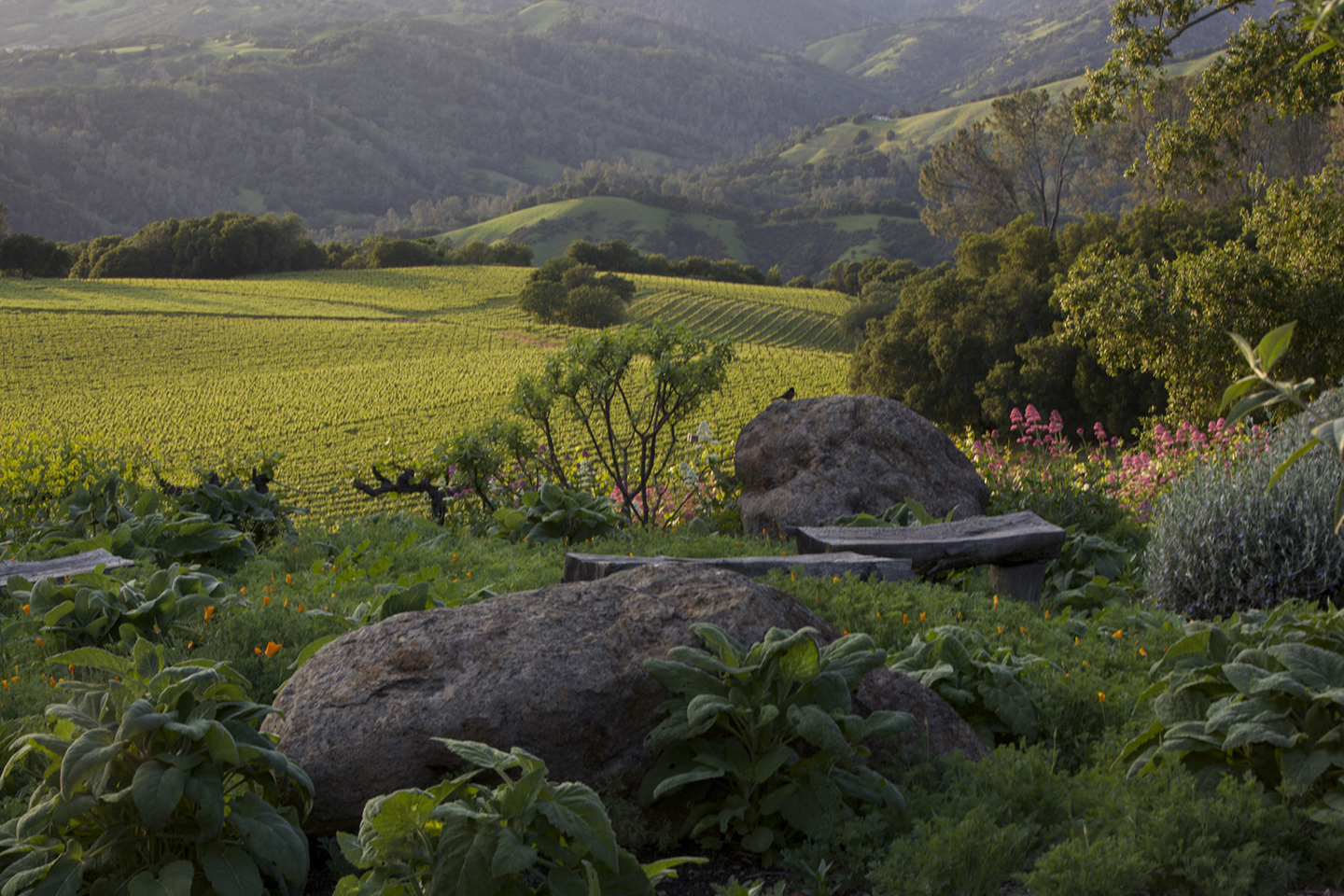 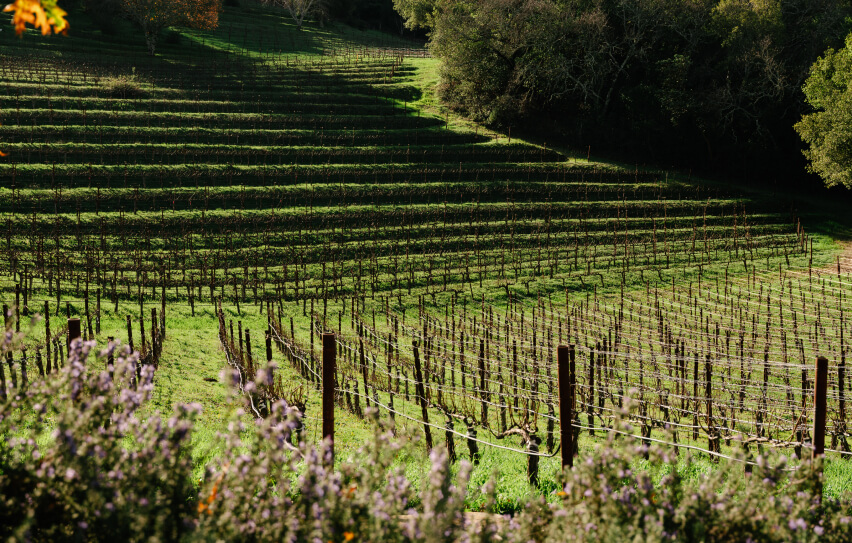 Great wines reflect the complexity and character of great vineyards, as well as the vision, passion and patience of those who farm them. Rising from 800 o 1,800 feet above sea level, the Chappellet Estate Vineyard on Pritchard Hill has earned global acclaim for yielding grapes that produce mountain-grown wines of rare depth, longevity and elegance.

Wines are handcrafted to embody the rugged terroir and intensity of fruit that makes Pritchard Hill famous. Recognized for their signature mix of grandeur, power and purity, each wine is a result of winemaking that begins in the vineyard. To honor and maintain the diversity of Pritchard Hill, the Chappellet team cultivates the estate as 48 individual blocks, each highlighting various soil types, elevations, exposures and grades. This mosaic of micro-vineyards features a wealth of varieties, clones and rootstocks for our winemaking team to work with.

“Continuous improvement is the key to attaining unparalleled wine quality and becoming one of the great wine estates of the world. Our family is focused on fulfilling this purpose, with a commitment to managing the land responsibly.”

Our commitment to Pritchard Hill throughout the years. 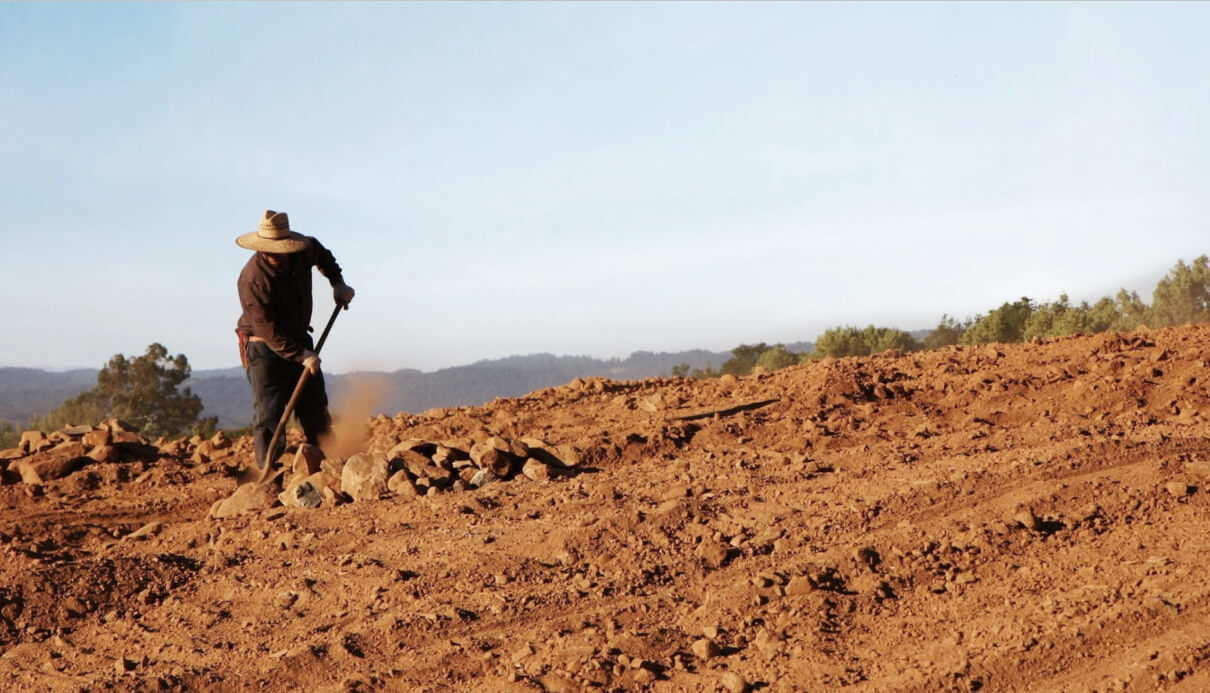 The Rewards of Replanting. The Wells Ranch and Hideaway blocks on Chappellet’s Pritchard Hill estate are in full production. Over the years, we’ve redefined the way we farm to reach the highest standards of growing and harvesting. The entire estate has been optimized for the right rootstocks, clonal selections, block to soil matching.
2000-2021 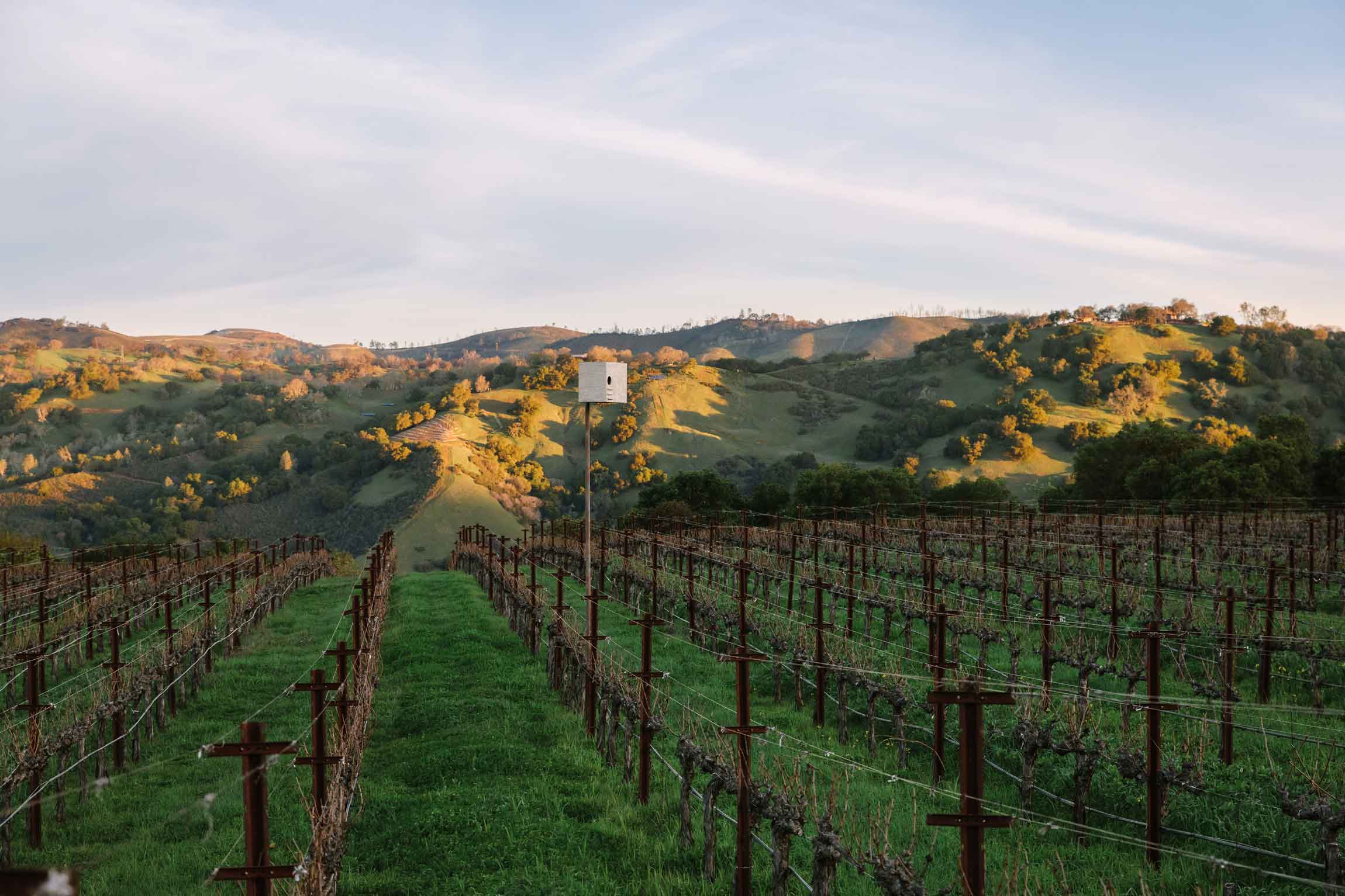 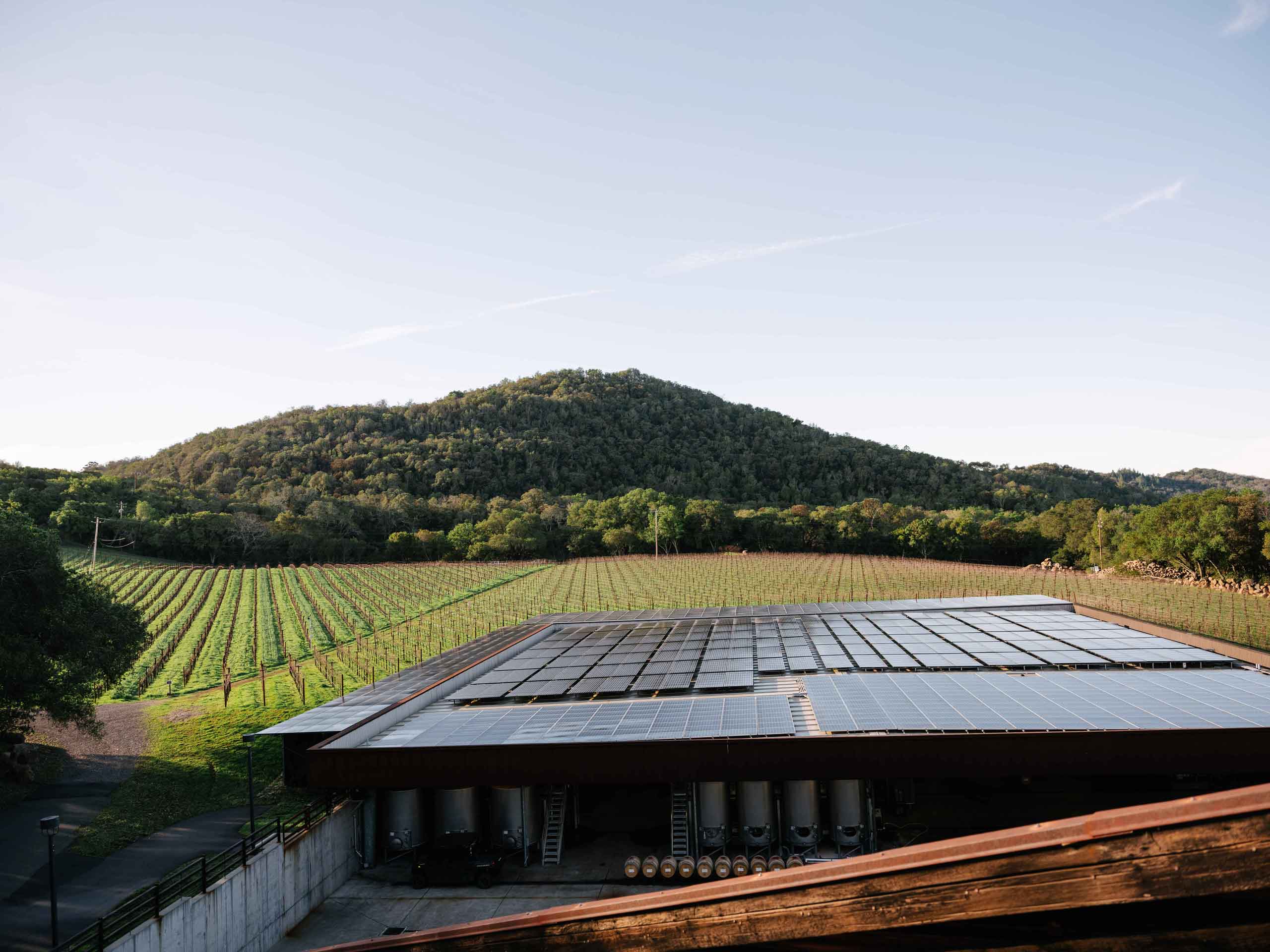 State-of-the-Art Barrel Chai. Nestled beside the pyramid winery,​ the barrel chai enhances Chappellet’s winemaking capabilities and carries a solar array to generate electricity for​ both structures.​
2012 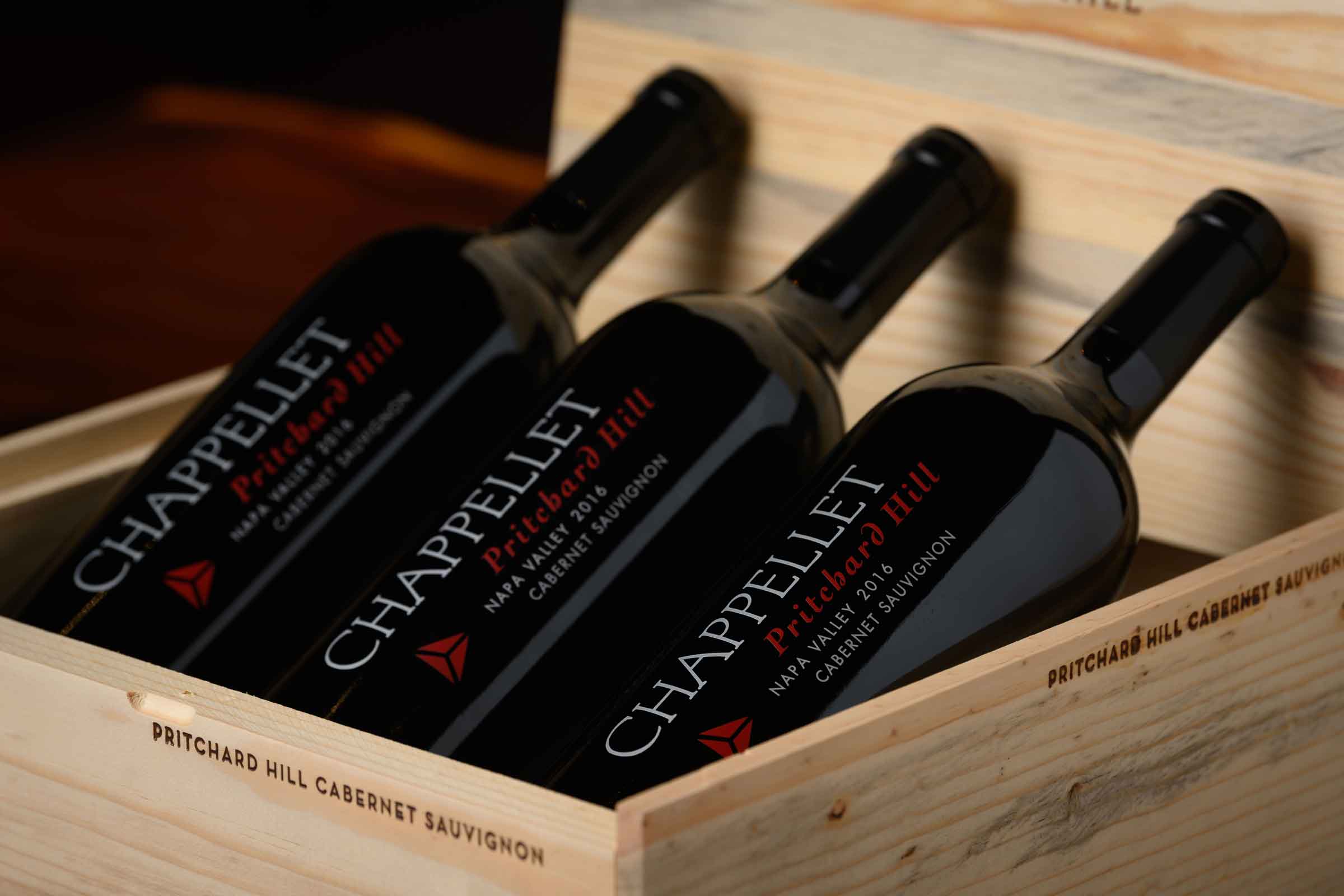 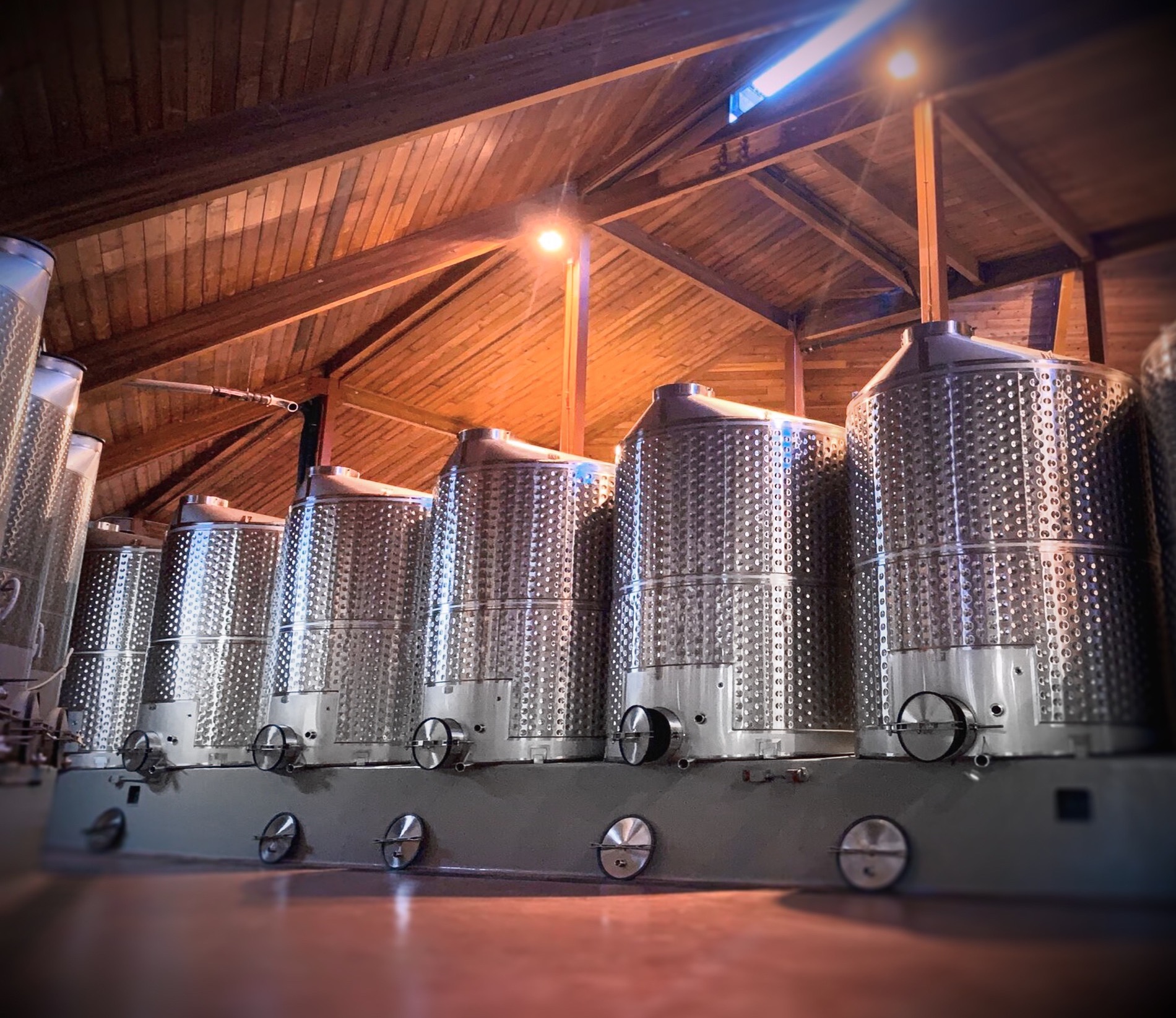 The winemaking leaders of today and tomorrow.

Bringing together their extensive knowledge of land and viticulture, the experts at Chappellet are committed to the joys and challenges of winemaking on Pritchard Hill as a lifelong passion. Our core team members (clockwise) have years of experience tending to this unique property and its intricacies—a bond that’s essential to our wines’ integrity. 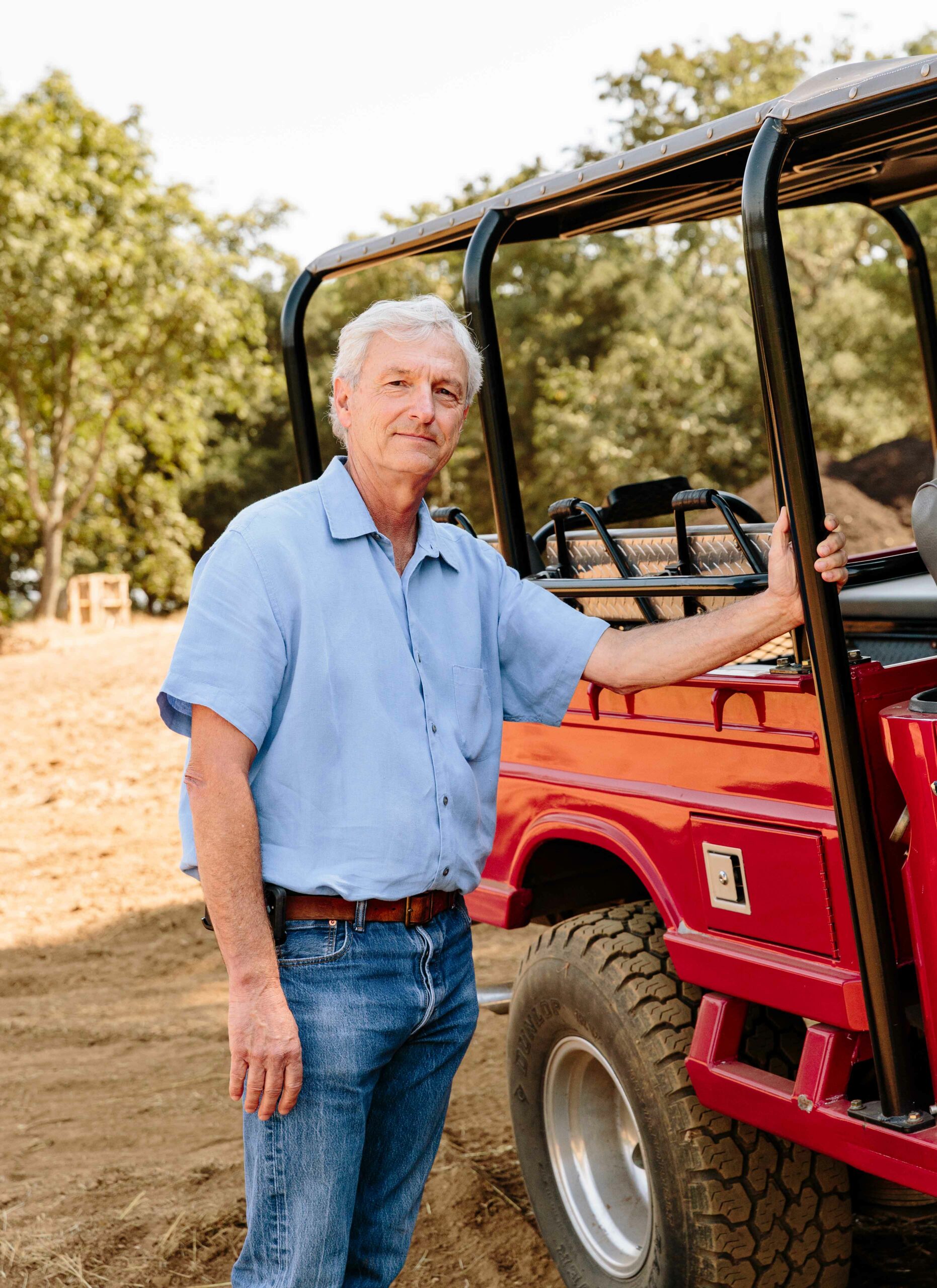 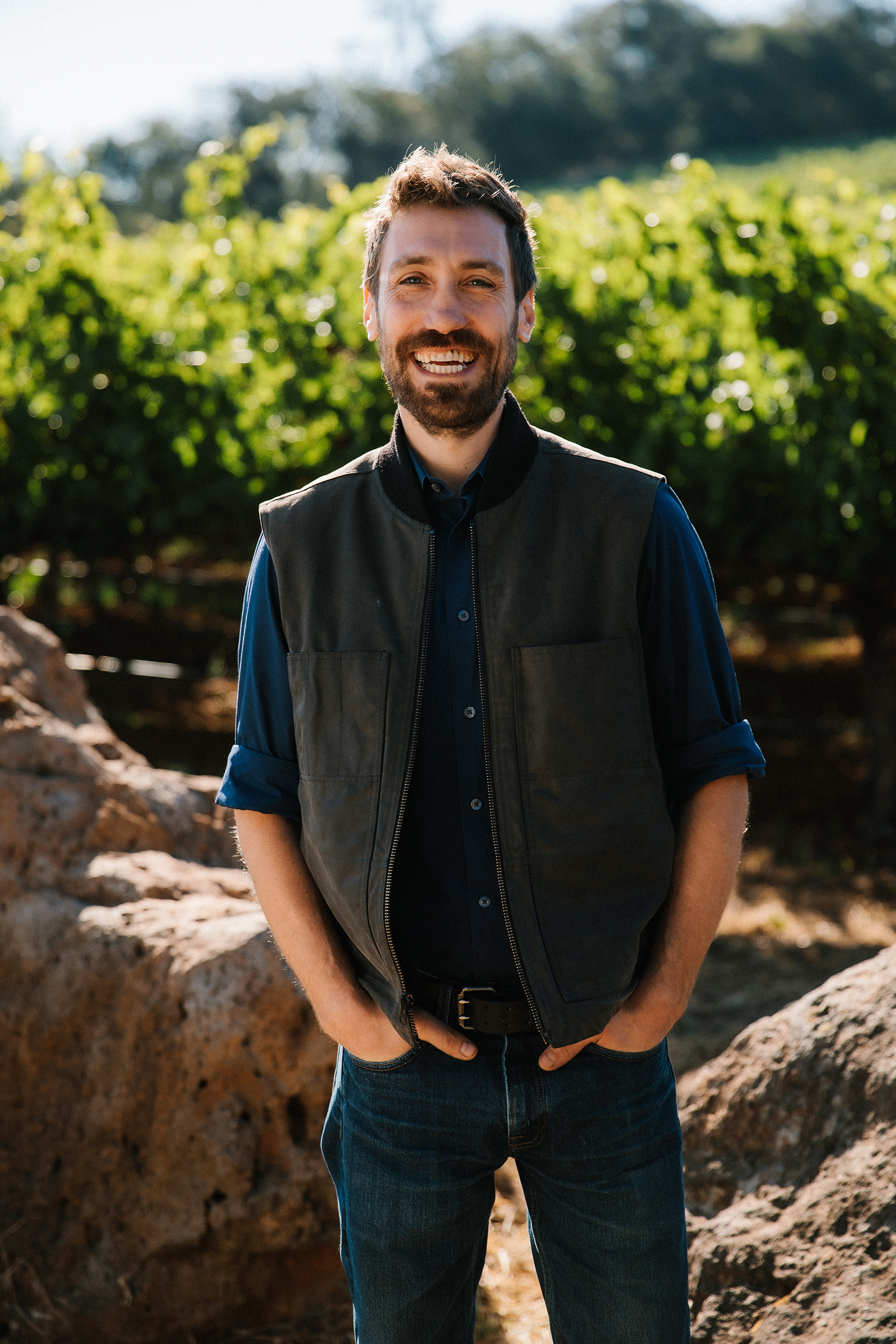 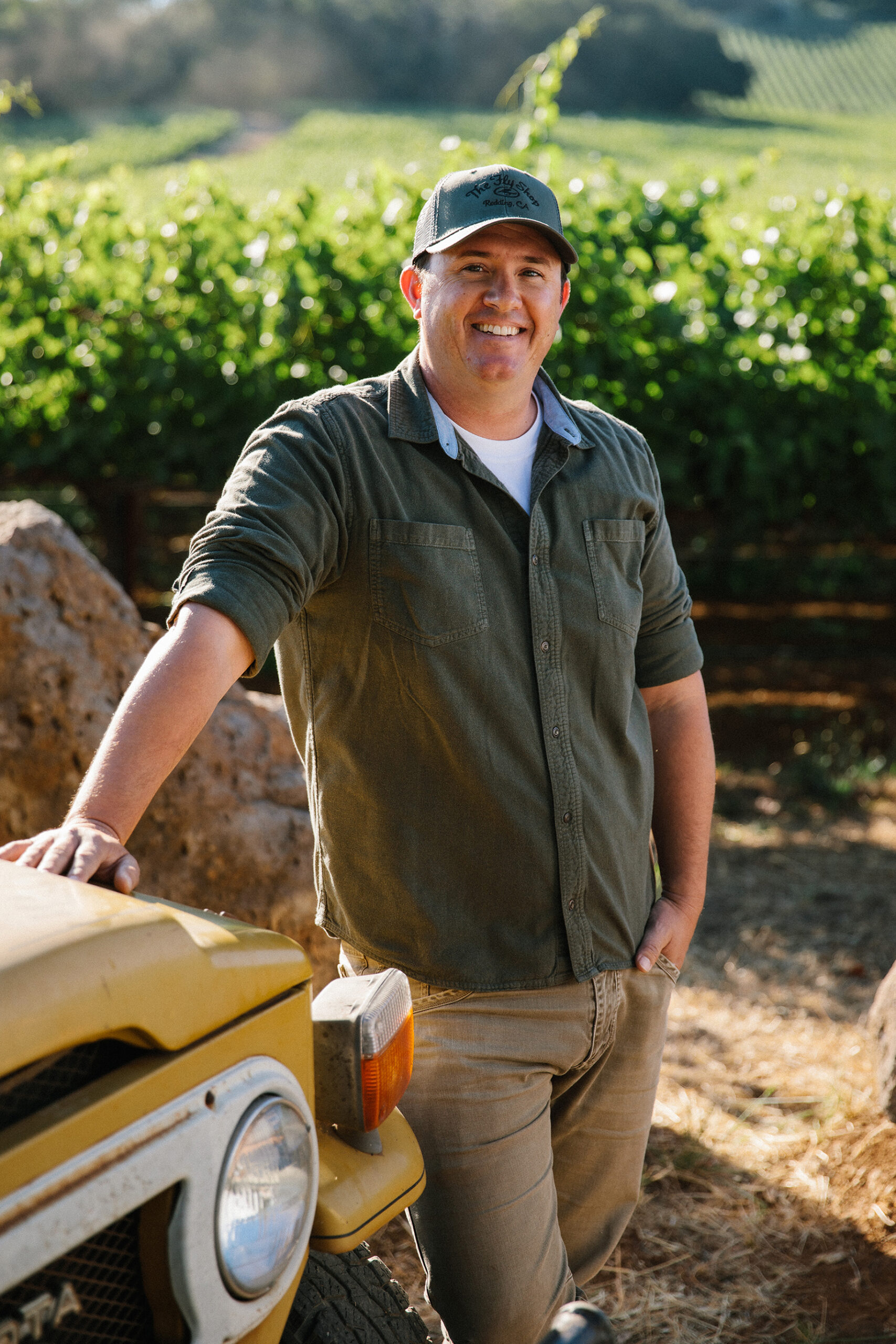 Born and raised in the Napa Valley, David Pirio has the terroir of the valley in his bones. As the vineyard manager guiding Chappellet’s estate since 1984, the rocky slopes of Pritchard Hill is the terroir Dave knows best. Over the years, he has learned the nuances of every inch of Chappellet’s 104 cultivated acres of Cabernet Sauvignon, Merlot, Malbec, Cabernet Franc, Petit Verdot and Chenin Blanc.

With elevations climbing from 800 to 1,800 feet, managing Chappellet’s Pritchard Hill Estate Vineyard is an awesome task. Each varietal and each of the mountain’s numerous vineyard blocks requires specific care and attention to thrive. Over the past 30+ years, Dave has learned the subtleties and sweet spots of each block, and works closely with Winemaker Phillip Corallo-Titus to continually improve the quality and flavorful intensity of Chappellet’s mountain-grown fruit.

Dave is also the point person for Chappellet’s sustainable farming efforts. Under his direction, Chappellet has become a proving ground for sustainable farming and non-chemical pest management practices, ultimately leading to the vineyard’s organic certification in 2012. The techniques used by Dave and his skilled, year-round vineyard team keep the vineyards healthy and thriving, while allowing each distinctive block the opportunity to express itself individually. In addition to farming organically, these practices include the use cover crops, bird boxes and on-site composting.

Dave’s background also includes training in both winemaking and vineyard management. Prior to joining Chappellet as vineyard manager, Dave worked as the assistant viticulturist for Christian Brothers and as part of the cellar team at Grgich Hills. Dave holds a degree in viticulture from UC Davis. He lives in Napa with his wife, Vickie, and their two children.

As Chappellet’s winemaker for almost 30 years, Phillip Corallo-Titus has guided the winery’s storied winemaking program, building on Chappellet’s legacy as one of California’s preeminent producers of Cabernet Sauvignon. A renowned winemaker with a passion for experimentation, Phillip has embraced the diversity of Pritchard Hill to craft benchmark wines that authentically express the terroir-inspired complexity and character of their mountain origin.

Phillip discovered his passion for viticulture and wine at the age of 12 when he began helping his father in the family vineyard. This early exposure to working the vines was complemented at the dinner table, where Phillip’s father would pour French wines from his cellar. Building on this foundation, Phillip studied agronomy, viticulture and enology at UC Davis. A dedicated student of wine, Phillip also traveled to France to learn about the great wines of Bordeaux and Burgundy.

In 1981, Phillip joined the Chappellet team as assistant winemaker, where he spent four years honing his craft, before pursuing winemaking opportunities at Stratford and Cartlidge & Brown wineries. In 1990, Donn Chappellet invited Phillip to return to the winery as Chappellet’s winemaker, a position he has held ever since.

Working alongside longtime Vineyard Manager Dave Pirio, Phillip’s approach to winemaking begins in the vineyard. From his focus on harvesting at ideal ripeness to his emphasis on maintaining the integrity of Chappellet’s 48 vineyard blocks throughout the fermentation and aging process (including 40 blocks and nine clones of Cabernet Sauvignon), Phillip strives to make wines that reflect both the vineyard and the vintage.

In the winery, he handles the grapes very gently and uses an array of fermentation, maceration and cellaring techniques to accentuate and preserve the distinctiveness of each varietal. “Because I’ve worked with our vineyards for so long and know each block so intimately, I am able to focus on the individual characteristics of each vineyard lot,” says Phillip. “This diversity allows us to enjoy a great deal of freedom during the blending process, while also adding immense depth and complexity to our wines.”

In addition to his role as winemaker for Chappellet and Sonoma-Loeb, Phillip also makes wine for Titus, his family’s winery. Phillip lives in Napa with his wife, Laura, and their two sons.

For over 15 years, Ry Richards has been refining his craft as a winemaker, while contributing to the creation of some of the world’s greatest wines. Working alongside our long-time winemaker Phillip Corallo-Titus, Ry manages the day-to-day operations of our acclaimed winemaking team, guiding fermentations, pump-overs, laboratory analysis and a myriad of other details that define great winemaking. Combining the meticulous approach of a scientist with an artist’s soul, Ry has found his ideal winemaking home on Pritchard Hill.

Raised in the Bay Area, Ry was first exposed to agriculture during visits to his grandfather’s avocado and citrus ranch in Ojai, California. While working at a wine shop during high school, Ry fell in love with wine when he was given the opportunity to taste an array of bottlings (though he had to spit everything into the wine bucket). After high school, Ry attended UCLA with plans to go to med school, until he worked a winery internship alongside our Winemaker Phillip Titus—an experience that solidified his desire to become a winemaker. “Phillip opened a door for me that changed the course of my life. I discovered that I loved the energy, environment and collaborative spirit of making wine.”

Ry joined our cellar team in 2006, where he emerged as a gifted winemaker rising through the ranks from enologist and assistant winemaker to his current role as associate winemaker. “I’ve been incredibly fortunate to learn my craft from a master, and to do so at a place with such pedigree and history. Chappellet is my home. It has allowed me to grow and evolve as a winemaker. I also met my wife (Winemaker Britt Richards) here. It’s an inspiring environment where we all feel that we are contributing to something profound and enduring.”

Ry lives in wine country with his wife and three young sons.

Andrew Opatz may have been destined to grow winegrapes on Pritchard Hill. Andrew’s grandfather owned vineyards in both Napa Valley and Dry Creek Valley, and as the nephew of our own acclaimed vineyard manager, Dave Pirio, Andrew often visited his uncle at Chappellet as a child. Today, after 15 years honing his craft on Pritchard Hill, Andrew is continuing his family’s legacy of winegrowing excellence as Chappellet’s associate vineyard manager. Working alongside Dave, Andrew oversees our full-time, in-house vineyard crew, guides all day-to-day farming operations, manages our organic certification program, and works closely with our grower partners to help cultivate some of the world’s finest winegrapes.

Born and raised in the Bay Area, Andrew grew up visiting his grandfather’s vineyard, where he learned to appreciate the cycles of the seasons and the dedication required to grow grapes. Though Andrew earned a degree in kinesiology from Sonoma State University, internships at Chappellet and GeoVit Vineyard Services during college kindled Andrew’s love of farming and inspired him to take numerous classes in viticulture. After graduation, Andrew joined Chappellet full-time in 2008, and has been an integral part of our team ever since.

“Dave has been my mentor, and his knowledge has been priceless,” say Andrew. “He has taught me that it isn’t about reaching that high bar—our job is to constantly raise the bar even higher. I grew up playing baseball, and I view every vintage as the start of a new season. My job is to grow, adapt, learn new techniques and try new things so that I can be the best vineyard manager I can be, and so that Chappellet can continue to build on our legacy of cultivating some of the most extraordinary grapes in the world.”

press notes
"Pritchard Hill: Arguably the most sought-after address in the Napa Valley.”
The Wall Street Journal
“This is one of the most spectacular places in the world to make wine.”
Vinous
“Pritchard Hill is the source of some of the finest Cabernet Sauvignon in the world.”
Forbes
“You feel the closeness and love at all corners. The property is beautiful and the wines are exquisite.”
The Huffington Post

Sign up for our email list to be the first to hear about the latest events, promotions and new releases.